This is a recipe of hash browns made from scratch. Bag of frozen hash browns can save the day when guests are coming or you are too tired to cook. However, it is easy to cook them from scratch too. We all love having hash browns in Mc Donalds and other fast food restaurants. We do not need to order them online or run to the eatery to satisfy our cravings. Air fryer hash browns are better than fried ones you eat outside, as they are not fried. Yes, they retain the same crunch.

Most frozen potato patty, fries, wedges and hash browns already have oil added to them before they are frozen. Hence, you cannot control the fat content in the potato cake. You can do so only when you make it at home. Learn to make this easy recipe in simple steps.

We all love potatoes. Be it old or young, kid or adults every one has a weakness for spuds. Hash browns come closest to aloo tikki you get in India. It usually has 4 main ingredients potatoes, maize flour, canola oil and salt. Hash browns are great as a filler in sandwiches or burgers too. Sometimes they may be the only vegetarian/ vegan dish you may get at a restaurant chain abroad in remote areas.

Refer to recipe card for quantities.

Which variety of potato do I choose ?

Choosing the correct variety of potato is the most important step in this recipe.The varieties that work well include the following.

Depending on where you live, you will find one variety or other.) I have tried with Russet,King edward,Dutch cream,Royal blue and all of them were good .The best result was with Russet and Kind edward potatoes.I haven't tried Yukon gold or Idaho, but I hear good reviews for those.

If you like your meal spicy, you may coat them in peri peri. You can also brush any spice mix + 1tbsp oil to give it a new flavor like Moroccan, Sriracha or Cajun.

Always eat it fresh. If you have something left over. Freeze or refrigerate it in an air tight plastic box. Air fry it before you serve. 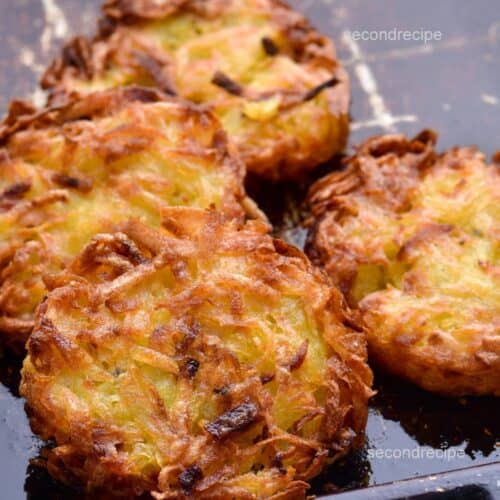 We do not want 100% boiled potatoes, we want them close to 70-80% cooked. It generally take 12-15 minutes in a boiling water. This recipe of hash browns  is different from the potato cakes recipe as we have partially  boiled the potatoes here, while in the potato cakes, we completely boil the potatoes.

I must say hashbrowns in Ninja foodi actually give a good competition to restaurant ones. They are golden and crunchy and have a soft interior. Keeping frozen ones at homes always help when you are too tired to cook.

Always keep your chimney on when using air fryer so that any fumes emitted are removed from the kitchen.

How do you cook frozen store bought hash browns?

If you want to cook in an iron skillet,cook it over medium heat flipping every 3-4 mins until they are golden brown.

Is butter or oil better for hash browns?

You can use a mixture of butter and oil or butter if you are not a vegan.Olive oil is also great for cooking hash browns.