We all love paneer tikka. However, we cannot eat the original tikka recipe during the Navratri or saavan fasting days. Falhari tikka is inspired from this. We use the original tikka recipe but make it gluten free. Falahari paneer tikka is a dish even kids will enjoy as it is low on spices. Most people order a tikka when at a restaurant. However, it is very easy to make at home. We use pineapple to give a hint of sweetness. Also, use root veggies like potatoes and sweet potato along with paneer cubes. Adding paneer to grilled veggies always makes things tasty. This is a dish you will enjoy thoroughly.

What is falahari or falhari ?

During the Hindu fasting period, we eat fruits, root veggies, dairy products and gluten-free flours only.

How to make paneer tikka a falhari recipe?

Here, we prepare a simple tikka paste with mint leaves to coat the pieces.Later we grill it in an oven. You can also try to make in air-fryer. We have used sago(sabudana)powder to get some crispiness instead of chickpea paste or besan as in original recipe. Potato has been semi-cooked separately as they take longer to cook. This ensures all the ingredients cook evenly. We have then lined them in a skewer and cooked further with paneer and pineapple pieces.

2. Add the paneer with other items and keep them in the refrigerator for at least 1 hour.

How to cook falhari paneer tikka in oven ?

How to cook falhari paneer tikka in air fryer ?

Read the recipe below 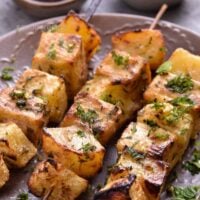 For the tikka paste

You may add semi boiled sweet potato as well.