What is rajma chawal?

It is one of the simplest yet tastiest of meals. There is no Indian kid who would not love his moms's Rajma Chawal as much as his noodles. Kidney beans are a rich source of protein. Rajma recipe or the kidney bean curry is synonymous with mom's kitchen. This is one of the easiest gravy dishes of North India. In fact, all you need for a good Sunday brunch is the Rajma masala with some jeera rice or pulao.

Kidney beans in spicy tomato gravy served with dollops of clarified butter or Ghee and rice. You will find this curry served at hotels, parties, weekend brunches and  at local Punjabi Dhabas. You can make it vegan too. Just opt out of the ghee, the recipe still tastes amazing. Has lesser calories too. Serve rajma with rice and it is a perfect gluten-free meal. You can also serve it with roti next day when the gravy has thickened.

There is something amazing about such simple meals. Be it Sindhi Kadhi or chana masala.Lobhia or kadhi pakora. Just make one big bowl of rice and you are good. Leftovers taste great even the next day. Have it with some bread or roti. The above mains are great for parties too. Just serve chole bhature or rajma chawal in main course. Samosa work great for starters along with some syrupy gulab jamuns and  chocolate ice-cream for dessert.Every guest of your party is happy!

How to boil rajma?

Soak the kidney beans overnight or 4-5 hrs. When their skin gets crinkly, they are ready to be cooked. Depending on variety, they may need 2-3 whistles in pressure cooker.

You may also cook them in a pot with enough water until they are soft.(cook them covered)

Additionally, you may use canned Rajma / canned red kidney beans, just drain the excess water and use them

There are 2 types of  kidney beans. The longer one is more easily available, and the other, smaller deep maroon Kashmiri one. In Kashmiri recipe, rajma gogji, chefs cook kidney beans with turnips. At Mata Vaishno Devi, you will find hundreds of stall at Jammu, serving  'Rajma chawal' to devotees. Mexican kidney beans curry Indian style, has indeed been a part of our childhood with such fervor, that it hardly looks a foreign import. This recipe is one of the staple lunches of any Punjabi, Delhi, Kashmiri or North Indian household. It is immensely popular with all age groups. It is also a life saver, when you have guests coming over.

Read the below steps for boiling rajma and see how to prepare rajma gravy .

1. Soak the beans overnight or 4-5 hours in hot water. Discard the water before you use.

2. Boil them in a pressure cooker with 3-4 cups of water for 2-3 whistles. Keep it aside.You may boil them in covered pot until soft.

3. Heat oil in a pressure cooker/pot and cumin seeds to it. Let it splutter.

4. Add bay leaves with ginger,garlic and chopped onions along with salt. Cover and cook.

5. Mix well and let it cook until onions turn brown.

6.Puree the tomatoes along with ginger and chilly. Now, add the tomato puree to onions and mix well.

8. Let the curry cook uLet it simmer for 8-10 minutes till it gains a bright red color and the oil oozes out.

9. Add the boiled rajma to the above mix and let it cook on a medium flame until it comes to a boil.

10. Once cooked,adjust water if required,Sprinkle kasuri methi(dried fenugreek) and let it simmer for few minutes.Garnish it with coriander, Serve hot with rice.

2. Add the soaked rajma with 4 cups of water in the instant pot,cook on high pressure for 15 minutes. Allow it to release the pressure normally for 10-15 minutes.

The cook time of Rajma also depends on the age of Rajma.Beans that are not too old take less time to cook.

3. Once cooked,add more water if required,add crushed kasuri methi and let it simmer for few minutes,garnish with Coriander,serve with Rice. 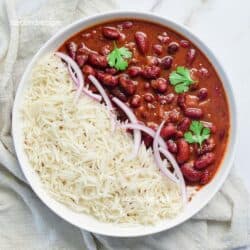 Spices mix option 1 (can be replaced with Curry powder,paprika and salt,refer option 2)

For rajma on stovetop

For rajma in instant pot

Rajma tends to thicken when it gets cooler.
It is also a great meal for the next day as it acquires greater flavor by then. The spices used can be adjusted to suit your taste especially the ginger and chillies. The cook time of Rajma also depends on the age of Rajma.Beans that are not too old take less time to cook. You may use canned Rajma/kidney beans,just drain the excess water and use them You may replace the spices with just curry powder,paprika and salt.

Can we make Rajma in instant pot without soaking ?

Yes, you can make Rajma without soaking in instant pot,however there are benefits in soaking of Rajma hence that is recommended over using dried beans directly.

Do we need to boil Rajma in instant pot ?

You do not need to separately boil Rajma in instant pot,as in the above recipe, you can add Rajma to the gravy and cook it with the gravy.

Can we use canned kidney beans ?

Yes, you just need to cook the onion,tomato curry and add the canned Rajma with some water,then cook for some time.

How many whistles for rajma to cook ?

The cook time of Rajma also depends on the age of Rajma.Beans that are not too old take less time to cook.I cook them for atleast 3-4 whistles and check if they are cooked, else cook them more.

Lobhia masala (Use the rajma masala recipe and replace the kidney beans with lobia/cowpeas.) You can also make a black bean curry Mexican style for a change. If you do not like too many spices, use our easy rajma recipe for a quick curry.

How to make rajma? (Video)

Here is a recap!

If you do not have pressure cooker, rajma recipe instant pot version also works great. Just use the same technique and use a pressure cook option.

Make sure you wash beans well and soak it for 3-4 hours. Do not use the water in which they are soaked. Always throw it away as it may cause indigestion. If you hate wasting water, pour it in plants.